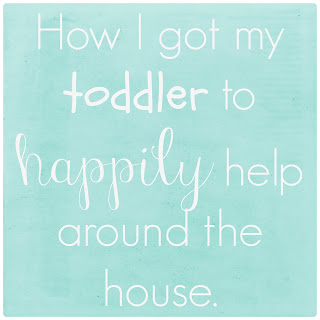 Toddler-hood can be a fun, but very tricky stage.  I feel like I lucked out in that area, but of course, Paige is still a 3 year old.  About 6 months ago I felt like I was having to beg and plead for any help from her around the house.

Part of the problem for her was the tv, believe it or not.  She got sick right before then, so she got in the habit of watching tv for a couple of days while she was resting & recuperating.  (Any ideas on how to keep a sick child entertained other than tv??)  After she felt better, she still wanted to watch tv instead of cleaning, or even interacting much.  She got stuck in that habit so fast, I was surprised.

As I always do, I thought a lot about what to do & did a lot of research.  This is what ended up working the best for me. 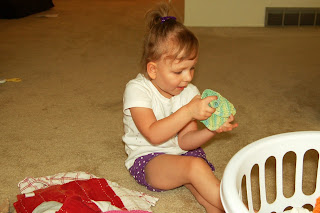 After thinking a lot (as I usually do), I decided to make 2 charts...a chore chart & a helper chart.  Kids will be a lot more responsive if they have some sort of visual, especially if it's a chart that they can interact with & see the progress.

Depending on the child you might want to introduce them a few days apart, so you don't overwhelm them.

For the chore chart, we kept it short & simple.  I chose 5 items that we would be doing to get ready for the day anyway since it was her first chore chart.  She needed to do these things before she could play, watch tv, or even before we left the house.  We chose go potty, get dressed, eat breakfast, brush teeth & read scriptures.

For the chore chart I made one thanks to this idea.  I knew that she would have fun opening & closing it.  Although, I really debated using this chore chart.  I did, use the latter's little icons, though.  They are pretty cute. 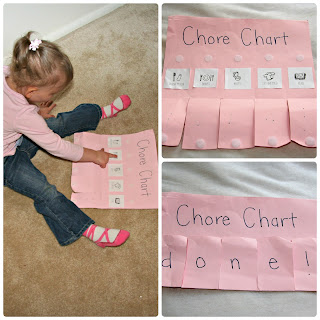 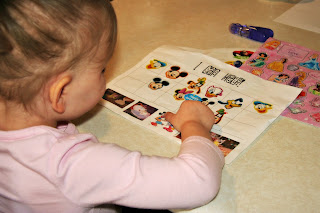 For the helper chart, I honestly just made a simple chard in Microsoft Word & inserted images of Disney characters cleaning.  As I explained what the chart was for, I showed her the pictures at the bottom & we talked about how Cinderella was helping. 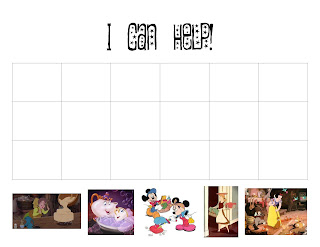 Once you have decided on & made your charts, you will need to sit your child down & let them know what the charts are for, how they work & what you expect of them.

I know some people believe that stickers are not the best way to go because it gives an instant reward, but for Paige at this point in her life I felt like it was the best way to implement it.  We did also decide together as a family that once she filled up the chart (with about 18 stickers) we would all go out for ice cream as a family.  It was important to us that the reward had something to do with spending time together.

Ask, don't force them to help (at least when first implementing this) and be okay if they say no.

I would always (and still do) ask Paige if she would rather help me or play.  We know the benefit of giving choices instead of telling a toddler what to do.  Once she made the decision (no matter what it was), I would respect her decision.  Every now and then if I really need her help I will give her a choice between tasks ("Would you like to help me fold laundry or help me do the dishes?")  I was surprised, though, at how most of the time she would choose to help me.

I would give her short simple tasks that I knew she could do.  Paige has been pre-diagnosed with something called Apraxia, which can affect her ability to move her body how she wants to, so I had to take that into consideration.   I would give her 'special jobs' like folding a wash rag, finding the sock matchers, putting her underwear in the right drawer or throwing away the used dryer sheets. 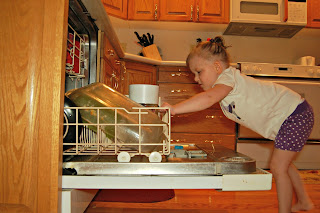 SHOW them how to do it first & do it WITH them.

Have you ever been told to do something, but you had no idea how to do it?  Well, if you're just starting out with implementing chores or housework with your child, then chances are that's how they would feel.  Be sure to show them what to do, do it with them, then let them do it on their own while you watch them.  Some of my favorite memories of my dad growing up are when we would do dishes by hand together.

Besides, sometimes it's cute the way she tries to fold socks in half & sometimes in half again.  :)

Remember that it's okay if they don't do it perfectly.  Give a very generous thank you, even if they just kept you company.

It can be so easy to say "no" the whole time your child is "helping", but remember if you compliment them on what they do right it will go a long way.  I think most of us have had bosses that were overly critical & didn't compliment you at all.  Did you feel appreciated?  Did you stay at that job for very long?  Well, our kids need the same encouragement as we do as adults, if not more.

Make it Fun (for you & your toddler!)

It helps us to turn on some fun music (thank you Pandora), play basketball by throwing the clothes we're sorting into the correct basket,  telling stories while we work together, or by just being silly.  Sometimes Paige even likes to have her dolls "help" us. 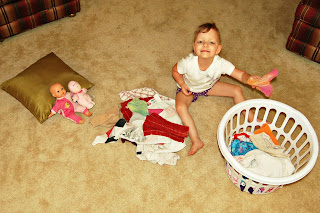 I heard someone say once that, "it's not about getting the job done, it's about forming the relationship while you get the job done" and that stuck with me ever since.  I'm far from perfect at this, but I try very hard to follow those words.

I think it's very important to give them a very generous thank you at the end, even if they just kept you company.  That includes, but is not limited to a big hug, a high five and actually saying, "thank you so much for your help, it made me happy!"   It's also very beneficial to tell someone else about how much they helped you that day (in front of your child)... maybe when daddy gets home?

Our FB Fan, Kayleen mentioned that for her, the key is to have a routine & stick to it.  They have certain chores at certain times of the day (morning & night).  Also a VERY good tip... Thanks, Kayleen!! 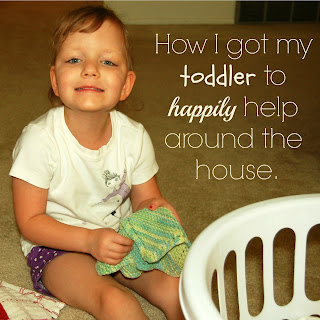 I haven't been perfect at doing all of these things every single time, but I still continually try to use these tips.  I have stopped using the helper chart (we eased off of it after she filled it up & we got to go out for some ice cream), but it was a great place to start to get her more motivated.  I love having such a good little helper around!

Did I miss anything?  Post the tips that worked best for you below!  (Two heads are better than one...)

This has worked so well that her dad asked me to make a night-time chore chart for him to do with her at night.  I made it the same way, and added some of the same chores as her morning chore chart has. 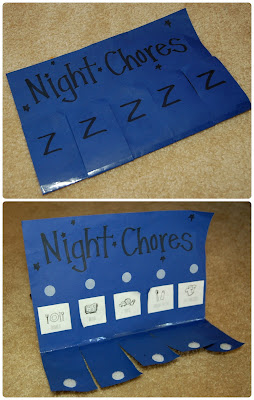 This was linked up to HOH  & Somewhat Simple & Whipperberry.
Posted by Michelle at 9:48 PM