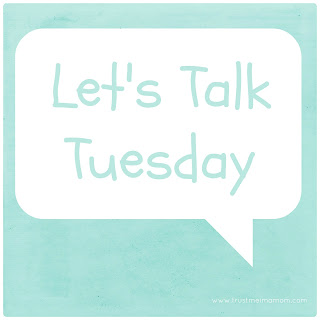 'Let's Talk Tuesday' is a bi-weekly post series with ideas on how you can help your child of any ability, but especially those with Apraxia, Autism, speech disorders or late talkers.  These are meant to be simple ways to encourage speech.  I am not a speech therapist, but I am a mom of an Apraxic child, I am just sharing these ideas in hopes that they will help someone else.
If you have a story or an idea that you would like to share, please click here for more information.

Thanks to someone on a facebook Apraxia group, we recently discovered the Sound Box Books

.  I wish I remembered who it was because
I could just give them a big fat kiss.
Well, if that wasn't weird I would... but really, they are a gem at our house.

were actually created by a teacher (Janek Belk Monocure), which surprised me a little bit because we were so impressed with them that I would have assumed a speech therapist would have written them.

I was excited when I found out our library had them (knowing nothing about them yet except that someone else who had a child with Apraxia liked them), so I reserved a few that I thought would be beneficial to Paige.  Paige loved them from the second we opened the first book.  She even would "read" along with us, which had not happened before with any other book up to this point. 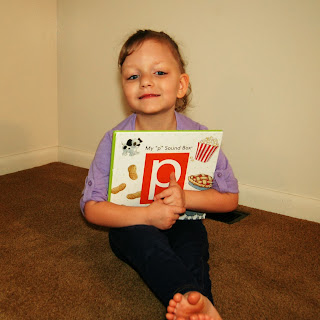 Within 2 days of getting them, both Rick & I noticed a difference in Paige's speech.  We were both so excited & reinvigorated because it had been so long since we had seen this much improvement from her... especially that quickly.  Rick decided that from then on it was part of Paige's nightly chores to read those books with him.

These books have been the most influential books for her speech that we have found so far.  It's been over a month since we first started reading these books & Paige has been improving ever since.  I did not expect this burst of progression to last this long.  I can't promise they'll work this well with your child, but I'd be surprised if they didn't help a little bit.

It didn't take us long to decide that it would be very beneficial and worth the money to buy the whole set so we could have them on hand at all times.

is that inside each book, there are simple suggestions, rhymes or games on how to encourage that specific sound with your child. 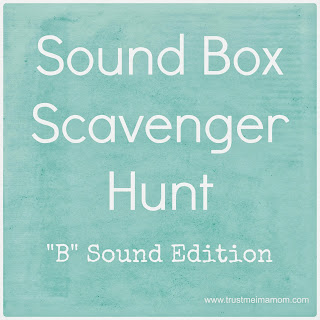 It didn't take me very long to realize that Paige & I needed to do our own sound box activity.

Since she was benefiting so much from these books, I decided we needed to take every advantage possible to keep this momentum going.

One morning we started our own sound box hunt.  We were working on her B sounds, so we started by reading (for the 100th time) her "B" Sound Box Book.  Then I told her I had a box & we needed to look for things that started with the "B" sound to put in it, just like Little B did in the book.  At first, Paige just wanted to put any random thing in the box, not understanding that they didn't start with the right sound, but she quickly picked it up.  She really had fun finding the "B" toys! 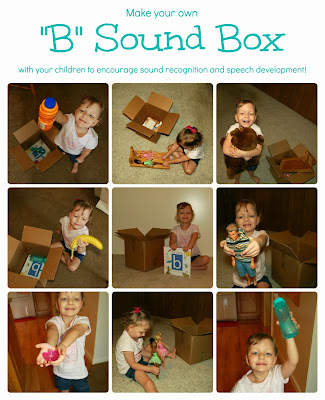 Once we had our box filled to the brim (and then some), we played with our "B" toys.  And by played I mean practiced talking, only Paige didn't know it was mommy speech therapy time because she was having fun.


Do your own "B" Sound Scavenger Hunt!

Here's a free printable "B" Sound Scavenger Hunt List, if you'd like to do one with your child, too! 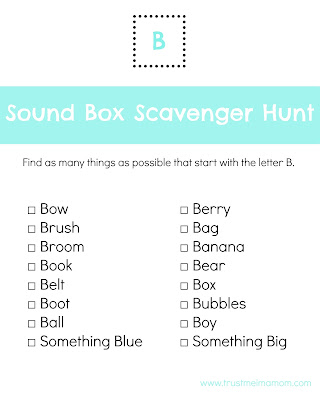 You're welcome to print this for your personal use.  You should be able to right click & save it.  It's sized for a normal 8.5 x 11 piece of paper.

You can also encourage your child to look for things that are not on the list.  It's especially fun for them if it's things they love &/or use often.

Sometimes encouraging & practicing can get exhausting since as a mom of a child with a speech disorder, you're in speech therapist mode 24/7 (as if being in mommy mode 24/7 wasn't enough).  This was an easy way for me to encourage her to work on her "B" sounds because she thought it was playing not practicing.  It was refreshing for me & I'm sure for Paige, too.

What activities have you done to encourage the "B" sounds?


This post contains affiliate links.  I will get a small commission from anything you buy via the links.  They will in no way make you pay more by using them, but they will help fund my daughter's speech therapy... and for that, I thank you!  :)