"Your Daughter Isn't Speaking Back To Me..."

For those who know my daughter Paige, and for those who have had experience with someone who has Apraxia, you'll know that Paige doesn't talk much to people she doesn't know.  Once she knows you, she'll "talk" your ear off, but until then, she's pretty quiet.  She knows that I'm her "voice" and that people don't understand her as much as she would like, so I'm sure that's why she's quiet around new people.


Strangers, or acquaintances that don't know that Paige has Apraxia often try to talk to her.  The older she gets, the more it happens.  Don't get me wrong, I'm glad that people want to talk to us.  In fact, I like talking to strangers (weird?... yeah, I just realized that's weird...).  No matter what the situation is though, when people find out that my daughter has a neurological speech disorder, I get a lot of responses.

This is the scenario that most often plays out...

We are at Target (my favorite store in the whole wide world) & a lady (usually on the older side) will stop to talk to my 2 young girls in the cart (because they are so cute... why else?!) :)  To simplify things, I'll call the "lady on the older side" Ethel.

Ethel: Your daughters are so cute!
Me: Oh, thanks!  I think so, but I'm supposed to think so, right?  (said with a smile)
Ethel: What's your name, dear? (said to Paige)
Paige: Puh-ahge (said very quietly).
Ethel: (looks back at me with a puzzled look)
Me: This is Paige.
Usually Ethel then proceeds to ask Paige more questions, finding it more and more absurd that a three year old is not talking like she had expected her to.

Once this gets to a certain point where Ethel is perplexed, I then go on to explain that Paige has a neurological speech disorder. 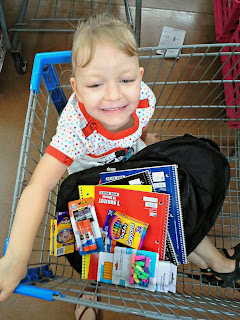 Although I understand that everyone is different & has different experiences leading up to that point, I find it interesting to see people's responses to our situation.

I do appreciate though, people asking to know more about Apraxia, instead of just awkwardly shrugging it off & not talking to us anymore.  Paige & I can both communicate with people, Paige just does it a little bit differently than other people.  Occasionally she'll sign, and sometimes she will try to talk.  Sometimes she talks quietly and sometimes it takes her a minute to connect her brain with her mouth, but she likes to respond to people's questions (she loves attention!).  If people can't understand her, I am happy to translate for you so Paige can be included in the conversation.

This post isn't meant to be a post to complain about how people react to my daughter's Apraxia, honestly, I completely understand that some of the reactions are not what I'd like them to be.  Before Paige had been diagnosed with Apraxia, I probably would have been the one to acknowledge it, but not know what to say about it.  I felt like the mom who wrote this letter.  Since then, I've become more understanding & comfortable with accepting people's differences & including them anyway.

And let's be honest... I'm still learning, too!

I'm still trying to figure out the best way to explain Apraxia to people.  It's complicated!

We had a visitor come to our home a few weeks ago and Paige came down the stairs to see who it was.  Our visitor greeted Paige & asked me if Paige talked.  I was surprised that she asked me this, but maybe I shouldn't be too surprised because this lady was a bit older, too.  I responded and said, "a little bit" while stroking Paige's hair as she stood next to me in my protection.

I've thought a lot about this moment since it happened.  I have no idea the "right" way to tell people. 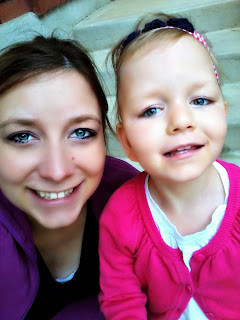 On some Apraxia Facebook groups, they have talked about this a few times.  Some people say that it's none of anyone's business that their child has Apraxia.  Other's have mastered a simple explanation of what Apraxia is.

I on the other hand, have not decided where I fit on this spectrum of special needs parenting.  I want to protect my daughter.  I want to focus on the positives and what she can do, instead of what she can't do.  But, at the same time, I don't want to make things awkward for anyone involved in that conversation.  I want to have respect for my daughter, for the person I am talking to, and anyone else involved.

Maybe you can help me...

How have you decided to respond to people regarding your child's special needs?

I've linked up with #itsallspecial!

*This post may contain affiliate links.  What that means is that I will get a small percentage of what you purchase through the link.  This will in no way charge you more money... in fact, I love to save money so I usually post links that are the best deals possible.  I am only an affiliate for companies I personally use and recommend, so I know you will be in good hands.  All money earned through my affiliate links or donations will go to my daughter's speech therapy.  ﻿
Posted by Michelle at 4:31 PM